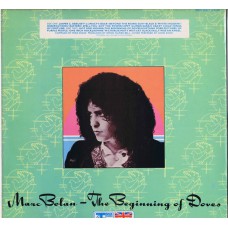 In 1972, a clutch of incomplete demos and outtakes were unearthed from Marc Bolan's mid-'60s vault and sent into the world as the (hastily withdrawn) Hard on Love album. Two years later, Track Record released the proceedings as Beginning of Doves. The tracks comprise both sides of the 1966 "Hippy Gumbo" single, the projected follow-up "Jasper C. Debussy," and a series of largely unaccompanied demos recorded by Bolan and producer Simon Napier-Bell during one breathless session at London's Kingsway Studios in October 1966. One then leaps ahead to the following fall, for songs taped over two separate demo sessions by Bolan and his T. Rex partner Steve Peregrine-Took.

A1 Jasper C. Debussy
A2 Lunacy's Back
A3 Beyond The Risin Sun
A4 Black And White Incident
A5 Observations
A6 Eastern Spell
A7 You Got The Power
A8 Hippy Gumbo
A9 Sara Crazy Child
A10 Rings Of Fortune
B1 Hot Rod Momma
B2 The Beginning Of Doves
B3 Mustang Ford
B4 Pictures Of Purple People
B5 One Inch Rock
B6 Jasmine Forty-Nine
B7 Charlie
B8 Misty Mist
B9 Cat Black
B10 Sally Was An Angel