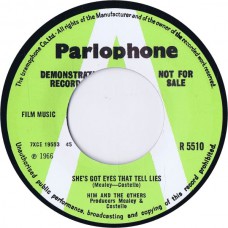 Him & The Others, were formed in 1964, when drummer Keith Giles and bassist Lennie Shaw, left their former group and decided to start a new group with local vocalist George Demetrious. They made one record on the Parlophone label, which received rave reviews, but never achieved chart success.